my bud jason anderson recorded an album at soma studios back in the very end of january 2006 through the beginning of february 2006. he, juliet, and felix stayed with me, dan, and danelle at 1735 while they recorded it. lots of fun times were had nights when they got back from the studio. that was the last flipping time i saw jason. it's been over 2 years since he recorded it and FINALLY the album came out on k records. please buy it. it'll pretty much be the best $12 you ever spent. you get the LP, a cd copy of the album and a bonus disc: http://www.krecs.com/Shop/product_info.php?products_id=3353 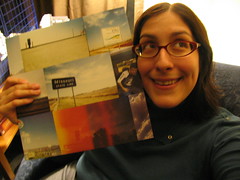 so, i got an email about a week ago from tim (strand of oaks - they are friends of jason's and were also his backing band on a tour or two) asking if i could help them find a place to play in chicago on may 10th, which is my 29th flippin' birthday and also a saturday. i wrote him back immediately and said i was going to put an awesome bill together at south union arts that night. i want to call it jubileigh. is that conceited? it's kind of like a make-out party, but i don't know. anyways, so then i emailed jason asking him if he could play if i flew him out from new york. as i was writing jerroid earlier today, plane tickets are STUPID EXPENSIVE these days. i am going to put jason's ticket on my credit card, but if anyone wants to donate a couple bucks to the "make leigh's 29th birthday the most best jubileigh ever" / "bring jason anderson to chicago" fund, feel free to paypal me. the cheapest jason or i could find from nyc to chicago is $240 r/t. barf. what are credit cards for, right?

other positive stuff is going on, but that stuff is friends-locked, so make sure you are logged in to read (cough, cough, tess). :)

he said, man, how can you live like a tramp out on the road
you know
bouncing like a tetherball
here and there
to and fro
chasing the highway like a dirty gravel rainbow
do you ever get release
let alone a pot of gold
and i said, dude, chill, remember last summer those books i would read
about the history of greece and philosophy
well they say maybe when we die there's peace
or at least just rest from these tiresome lives we lead
and either way, that makes so much sense to me
besides, who cares until they're deceased
and the clergy weeps
and the family grieves
and the tombstone proclaims R. I. P.
and they rinse the fillings of your poor old teeth
and they cover your ____ in a snow white sheet
and they hang a tag from your ice cold feet
and they quickly ____________
and they say, he was a pretty, the newspapers say he was a pretty
oh they claim he was a pretty good guy
and they let the body lie
yeah they let the body lie
oh they let the body lie
yeah they let the body lie.
well, everyone must die
it's true,
but first we get to live
don't ever ever forget to live