out of other music's top 25 releases of 2007, i own one: st. vincent - marry me. i know z has band of horses - cease to begin and maybe the spoon record. you know what though? i don't feel like i am missing that much. i used to worship other music for being the end all be all of music taste. my top list is going to be less crazy than last year because although i've been listening to stuff, a lot of it has been over and over again. i feel a bit older. listening to old things and nostalgic albums a lot more than new stuff. though there is definitely new stuff that gripped me in 2007, it is a lot less than in previous years.

i have had a headache for two days straight now. tonight zachary and i went to see our pal kris racer play at schuba's with a full band. walking through the bar was hell. i hate smoke. so much. i cannot wait until the smoking ban goes into effect. we stopped in at jewel to pick up some more OJ for me who is now the sicky boo. then i came back and sewed some coasters for a co-worker's birthday. i had already bought her a gift for xmas and i'd forgotten her bday was next week, so i figured i'd make her something. she loves christmas stuff so i used snowflake fabric and then two other fabrics and voila. they are not perfect, but i think they are pretty good for a first try. in the middle i used wool felt. 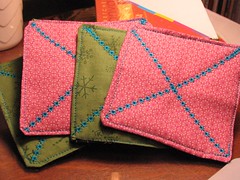 last night (tuesday) i went to the hideout and met sei-jin there for for the holiday sale and then picked ginny up and headed to relax lounge for the venus winter issue launch party. had a couple free effen vodka drinks and went back home to make lentils. the night before that i made alex's christmas present and took lots of photos of hoggle (3 of which i made new postcards of). alex, i know you're home a lot more with your new job, so you are likely reading lj on a more regular basis, so don't look at what is behind the cut:
( Collapse )

here are the photos i had made into postcards. i'll sell them in sets of three. limited to 100 sets. w00t. 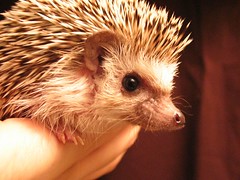 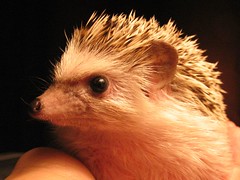 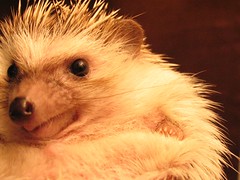 also, monday night i sewed a thing to go around his pvc pipe to make it a bit more interesting for him. he pooped and peed in his other tunnel thing and it will have to be hand washed which i haven't had the time or energy to do, so i figured this was a quick solution. he likes it! 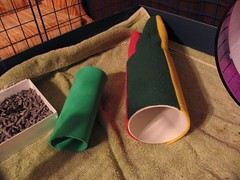 so zachary and i decided that we weren't going to get each other big gifts this year, but rather go in on things we've been meaning to get for both of us. so we bought this couch cover from sure fit. we'll also be framing my stanley donwood print and z's tom waits painting i got him last year for our anniversary. so exciting to have our living room finally somewhat coming together! the couch we have is a hand me down from a girl who used to be a lawyer at a law firm we share space with. she got new furniture and told me she had a perfectly good couch we could have as long as we took it away. well, beggars can't be choosers, but it was pretty stained and covered with cat hair and who knows what else? we rented a wet vac to clean it and it only somewhat worked, but we hid it underneath a comforter until we got a couch cover.

you can't really tell, but it looked pretty bad: 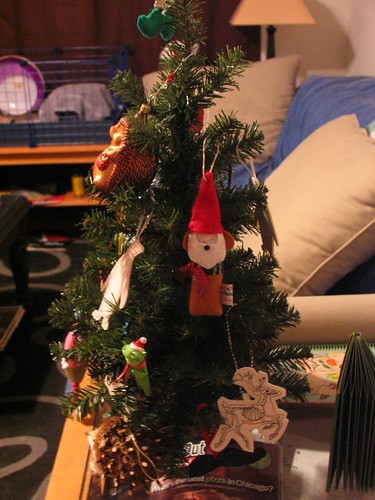 here it is looking a million times better after we put on the cover: 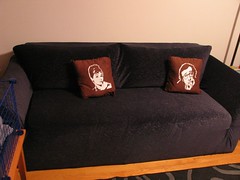 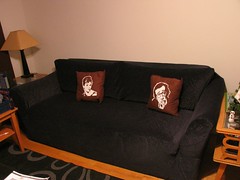 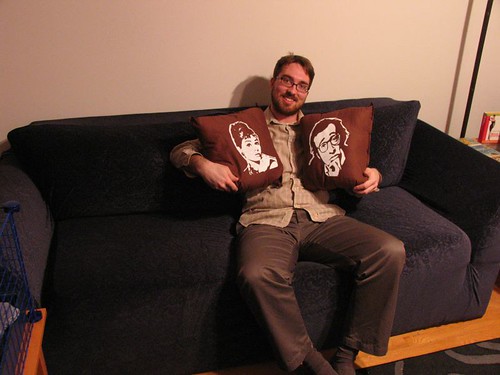 oh yeah, i also got us pillows to go on it. one is audrey hepburn and the other is woody allen. i special ordered them on etsy. there is a slight dark spot on her face and i am kind of let down about that, but otherwise, they do look pretty cool.

tonight i ate dinner with kris, nate and joe swanberg's two brothers at sweets & savories. z is about to make us a monkey bread since he is making another one for work. after dinner ginny and i went to target (me in search of tins to bring cookies to work in and her for cat food). where are all the tins, target? only a selection of like maybe 7 to choose from. last year i could have sworn there was half an aisle devoted to them. oh well.