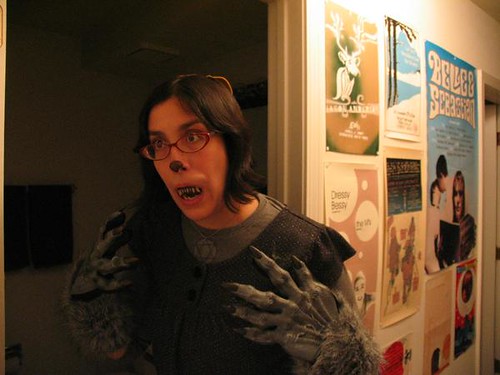 yes, i did it. saturday night i went to three friend's parties (allison r. --> josh m. --> kris n.) dressed as werewolf bat mitzvah. only a handful of people got it, but it was alright. it was fun but wearing the teeth proved ridiculous. the package says it's easy to talk. if by easy they mean impossible, then yes, it's easy to talk.

with zachary gone last weekend, i did some crafting and hung out. saturday i went to breakfast with boehms and then to jo-ann's and target with lauren who i hadn't gotten to hang with in ages. sunday i'd had plans to go to an orchard and corn maize with the swanbergs but their friend had asked another friend before they'd asked me so their car was full so i tried to round up some people to come in my car. a new friend, erica wanted to go so she got to my place and we researched the farm and deemed it too far away (1.5 hours) and ended up talking, playing with hoggle, decided we wanted to eat and went up to devon for indian food and then to broadway supermarket to get asian groceries. have i mentioned how much i love my city lately? well, i do. sunday i was driving to pick z up from clark & lake and i took the madison street exit and then all of a sudden i was driving the wrong way down a one way street. i did a u turn to avert the situation and BLAM an undercover cop car pulled me over. i was so freaked out after realizing i was going the wrong way that he just gave me a verbal warning. i picked up z and came home and made baked tofu and whipped up some spicy mayo and ate that while we watched meet the feebles.

last night zachary and i went to see bob dylan and elvis costello at the chicago theatre. we were further back than we thought and both exhausted, but i am glad it all worked out. it was the most expensive actual concert ticket (as in not from a scalper) that i have ever purchased. it was a good show and i am glad we went, but it lacked a little something. we were seated by two 40something couples who made me want to rip my ears off. what's so funny about peace, love, and understanding? the classic dylan songs he played were: lay lady lay and like a rolling stone. he quickly rambled through them. it reminded me of all the times thom would play creep to humour the crowd and just hold the mic into the audience. his voice is really sounding a lot like tom waits these days. actually, i really would have rather seen tom waits again than dylan if i'd had that choice. :)

i got back from the show pretty late and came home to THREE ETSY SALES in the span of a couple hours. what!? a friend had put me in her treasury and another random person had put me in theirs. um, awesome!

i really want to hand out candy tomorrow in costume, but jerroid's party is at 6:30, and the halsted parade is at 7. what to do.