i'm not sure that cool hand juke cards is really what i am going to call them, but it's a start. i do enjoy witty names. so, these puppies are customizable, but i can only fit 30 characters total in the song title lines. not sure how many characters i can fit in the band name, but as long as it's not something super long, i'm sure it will be okay. i'm still debating whether or not to gocco text inside or just leave them blank. so, here you go: 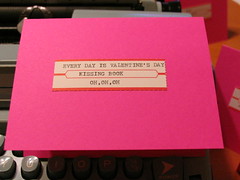 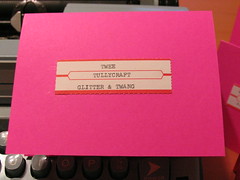 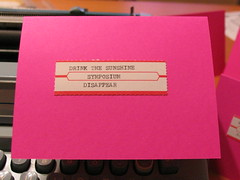 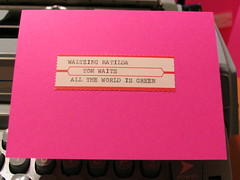 tonight i watched ugly betty and then jubilee, which i found kind of abysmal, and then two weeks, which blockbuster sent me by error (in addition to sending me the correct two movies), which was surprisingly really good and it ended with an iron & wine song. zachary finished off that aquatic life puzzle last night and i took a picture but it was blurry. i love that dude, btw. he's in ohio this weekend doing bday stuff with his mom and sis, so i won't see him until sunday night. yeah, it's pretty quiet right now. just me & hoggle and the space heater.

last night we had gone to see our friend joe swanberg's film, hannah takes the stairs. it was fantastic. you really should see it. just by happenstance joe happened to be doing a q & a after the film and kris was there and it was great seeing them and i really love them. they invited me to an orchard on sunday and yeah, i am going to not be a hermit and go. funny thing: kris has a class with an old pal of mine from virginia, mike roth and he went to hang out at their place and was like "i've been here before", since i'd taken him and his gf to a 4th of july party that ryan and nathan threw in 2006 when kris & joe were out of town. such a funny small world. i'm glad i'm in it.

ps. z and i had watched so many movies lately, but the one i think i enjoyed most was SURF'S UP. seriously.

double ps. i put up a photoset on flickr of the vendors at THE PACK LADY: Rummage & Craft Spectacular! 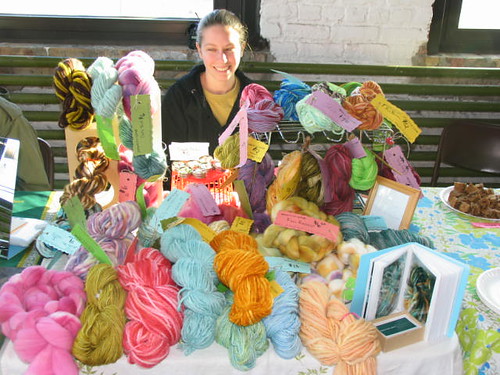 SO SO SO, i have figured out what i want to be for halloween. i thought it'd be a copout recycling my POSTAL SERVICE costume from a couple years back, so i kept brainstorming with pals. my friend josh miller sent me a link to his party evite and the welcome pic was taken from the 30 rock werewolf bar mitzvah episode. holy heck, that's it: werewolf bat mitzvah!

what i already own:
- a dressy dress (let's hope i have something kind of appropriate for a jewish girl's coming of age)

what i need to buy:
- fake teeth

what i need to make:
- fake fur to make fake ears and arm and leg warmers out of
- a yarmulke (hopefully i will be able to sew one)
- a star of david necklace (shrinky dinks)