we have a lot of shows that go on at south union arts that are under the radar, but this is one that i really hope people come out too. this band slaraffenland from denmark will be playing october 6th. we're still fleshing out the bill, but they're reason enough to come out. please give them a listen because they are one of the best bands i've heard in awhile:
http://www.myspace.com/slaraffenland

so, the rufus show we went to the other night was being filmed for a live video directed by albert maysles of grey gardens fame. we didn't know that until we got there. it made for a couple awkward re-takes, but rufus was, as always, charming. i like it better when the camera is not on though because he can be his usual rambly self that we all love. i called danelle to tell her at the intermission. it was pretty amazing though. we missed a couple magic numbers songs and they were good, but i'd rather see them in a club any day.

i watched strings last night and, while it was amazing to watch, i didn't really feel like the story was fleshed out. then eliza came over and we watched ugly betty, season 1, disc 2. today i rented disc 3. i am officially obsessed. boehms and i went to jerry's after work and i got the jenny f. without peppers but it came with peppers. yech. their milkshakes are sublime though, possibly better than chopper's. tonight z and i started to watch tokyo godfathers, but i just could not get into it. i am going to try again tomorrow though. instead we started watching season 2 of extras while i made a BUNCH of "picked you" cards. oh my god. daniel radcliffe and his prophylactic. that's all i have to say. wow.

i took a nap on the couch straight after work and now i am not sleepy at all. poop.

rhymes with twee question
should i make different pick designs other than the original "i'm glad i picked you." version?

other ideas:
- i'm glad you picked me. (i know it's only a subtle difference, but sometimes the people you love pick you)
- i couldn't have picked a better aunt/uncle/brother/sister/mom/dad. happy birthday. (this would just have one pick on it with a heart above its' head)
- just wanted to send you a pick me up.

do you have a good idea? i'm just trying to make sure i've got my bases covered. i think before crafty bastards, i'm going to make a xmas card idea i had last year that i still love. no sneak peeks. i have to see if i can draw it first. :)

ps. i don't know if i've mentioned it or not, but we love our downstairs neighbors angie and andy. they came over for the trapped in the closet viewing party and they left this on our door: 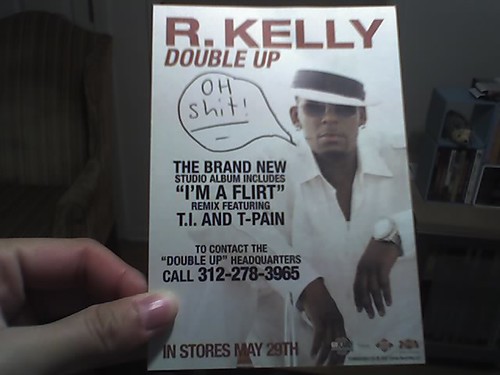