okay, friends, why have none of you posted trapped in the closet: chapters 13-22 reviews in their ljs? z and i caved when he got it in wednesday from amazon even though we are supposedly having a trapped in the closet party on saturday. anyways, it's brilliant, but i kind of liked that he was really taking himself more seriously during the first 12 parts. yes, i know he is a messed up dude, but i feel like it's an important bit of pop culture and i do enjoy watching it.

funny, but not as funny as trapped in the closet: hipster olympics
http://myspacetv.com/index.cfm?fuseaction=vids.individual&videoid=16466903

stephanie has turned me on to some great performers through the years, but man, seeing david singer the other night at SUA was pretty fantastic. anyways, i made two little videos and put them up on youtube. man, i have so many old videos i want to sift through and put up on youtube. yarg! anyways, here is one of them:

david singer - i will come back from the war


tonight i packaged up the pierogi cards i made last night. i'll put them in the RWT shop tomorrow. wahey! here is what they look like: 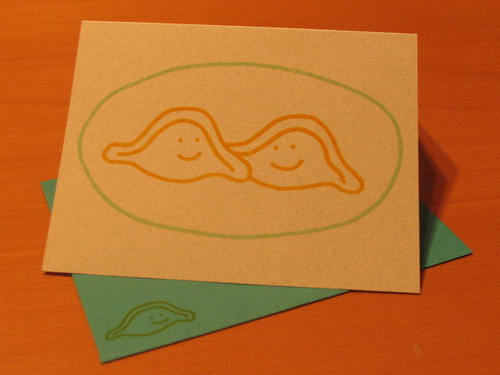 has anyone seen the illustrated man? we finished it tonight while i was packaging and wow, it was surreal. kind of reminded me of the film version of slaughterhouse five meets that weird post-apocalyptic paul newman film quintet. we also watched the ex which was alright. i found an ant crawling on my pants a minute ago, but i see no other ants. wtf? sorry this post is all over the place. i've been all over the place trying to get stuff i've been meaning to do for ages. this weekend i am going to work on those handmade packages. hey, on wednesday night i made sushi for the fifth or sixth time? this time the whole process only took about an hour and a half maybe. we had been talking about eating all you can eat sushi at sushi para II but then i decided just to do the same thing at home since i had all the ingredients: sweet potatoes, avocado, cream cheese, asparagus, cucumbers, sushi rice, tempura flour, panko, vinegar, nori, but i was missing my beloved kewpie mayo so i couldn't make spicy mayo. instead i just squirted some sriracha, which is what i mix with the mayo to make spicy mayo, on top and it still tasted delicious and it's way better for me that way, so from now on, i may stick to that. plus, the fridge shelf life of the kewpie mayo is so short and i generally only make sushi once every couple months. i could eat sushi every day, but the process is too involved to do that. 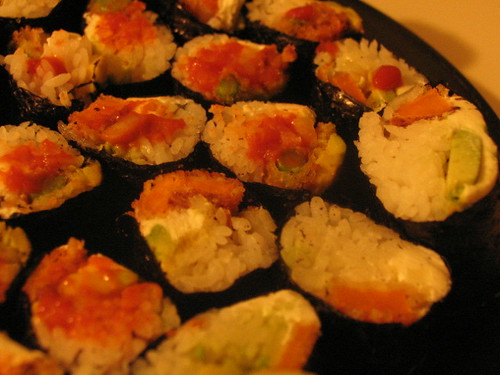