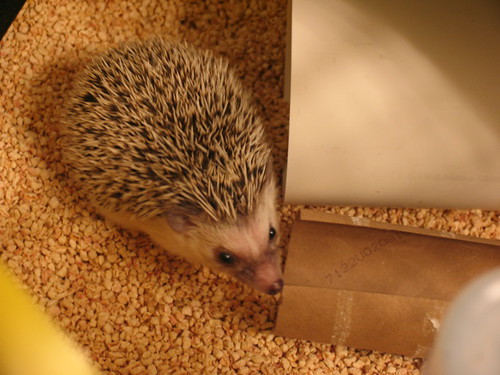 as you can see, tonight z and i went to pick up our african pygmy hedgehog from vickie + gary jester. we decided on hoggle for his name, so everyone say hello! i heard him crunching up some food a bit ago. he's had quite the night though. he was born on april 7th, for the record. expect lots of cute overload hedgie shots soon. seriously, he is doing so well. my tomato plants are a bit better. after pruning a bit last night and watering with cayenne peppered water things seem to be just a bit better than yesterday on that front.

to make things even better today, jenny t. has moved back to chicago from seattle and she lives right down the street from me! i was going to go out with her and jamie g. tonight and i was all ready but then i took off my shoes and realized i just wanted to sit around here listening to hoggle chomp on food and run on his wheel. i'm totally head over heels in love, dudes, with both z and hoggle!
Collapse