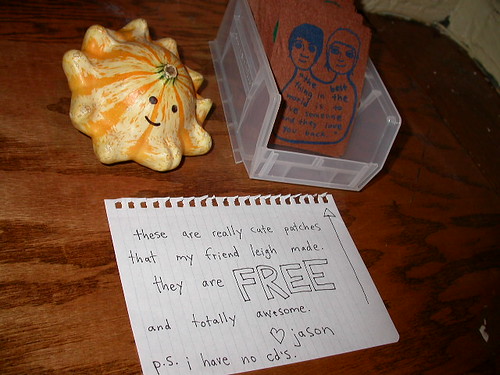 i made some patches for jason's show and it was a good thing since he had NO MERCH whatsoever (see above)! i also did my sampler contribution! go sampler! i hope it will get there in time! :)

as i walked to damen from dan & nadia's this morning i felt paul everywhere. sigh. i am doing so much better though.

i feel that from tuesday through yesterday i was living for other people and wasn't doing anything just for me. i am trying to turn over new leaves daily, but it's a process. you know what i love? new friends who feel like old friends. many of them are documented in the above photos. also, i loved being close to new and old friends singing along with jason last night. jason anderson = a band aid for all of our aching hearts. he is doing a midwestern tour in january. please be there.

please note: my phone is DEAD, as in, it no longer charges and is completely dead. the new one is being sent my way and should get here within the next 7 days. it will be strange not having a phone of any sort for that period. i will be accesible via email, aim, neatly printed or cursive letters through the post, and notes shoved underneath our front door.

Time Magazine's 100 best English-Language novels from 1923 to the present. Thanks to Diana!

Behind an lj cut are the ones I have read: ( Collapse )
Collapse