yesterday stephanie and i had pretty much the most rocktastical day beginning with being extras in a video shoot for the Hold Steady's "Little Hoodrat Friend." i didn't post about it beforehand because, honestly, i thought i would jinx my chances of actually being picked or whatnot. turns out 2/3 less people than they had anticipated for the shoot showed up. it was absolutely surreal dudes. it made me really and truly miss the two times i made music videos. after 4 hours on the shoot, it was over and i promptly collapsed since friday night was a doozy as well.

when stephanie and dan tried to coerce me out of bed so we could go eat, i decided that we all had to speak in gospel while figuring out where to go. we resumed normal speak and then i said, "okay, now we have to speak in gangsta" and i said something like, "yo. where we gon' get some grub?" dan replied that that was "so 1998" and that it'd probably be something more like, "hey man. let's get some gubbins." thus, a new word was created, or so we thought. at 3am my irish friend eoin told me over aim that it was slang for bits and parts.

we dined at thai village and then went to pick rani up to go see john vanderslice (jv) at schuba's. oh man! stephanie was (wo)manning the merch table and i saw david who used to be in THE PROM standing there and it turned out he was touring with john as the bassist. awesomeness! he is and has always been the bee's knees. after drinking one drink, i edged up front to take some photos. jv grabbed me as he walked off the stage for massive hugs. i was thinking about it and i have known him for 7 years now; granted there are some gaps in not seeing him, but you know. anyways, he is still made of love and gubbins (and other things). we all took photos with jv even though we didn't have a chance to do the photobooth with him. remember that i'm always the photographer and never the subject. i look utterly terrible after my insane and awesome day. :) 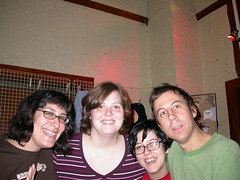 If there is at least one person in your life whom you consider a close friend,
and whom you would not have met without the internet,
post this sentence in your journal.

are you happy now?
i want to drink.
i want to do something weird to myself.
oh no; i want to fail.

i dont want to die.
i want amnesia.
i want to sleep for three hundred years.
i want you erased; yeah.

shame on me.
for opening to you...
i want a fucking coma.
i want my summer..
back.

today it's been one month. while i don't feel like this most days, it does hit me like a train sometimes. i slept most of today away. when i laid down for nap #2 after eating and saying goodbye to stephanie, i just had this song playing over and over in my head, juxtaposed with 'jet ski accidents'. i know jason's show next sunday is going to make me bawl. one foot in front of the other.
Collapse